Unfortunate for us our home only got FTTN NBN connection. but like others I thought I would share the speed improvement results from cleaning up wiring inside your own home. we have 2 phone sockets 1 in the bedroom and one in the kitchen. by removing the cable from the kitchen to the bedroom, we managed to increase our maximum line rate from 14.2Mbps upload and 35.21Mbps download to 20Mbps upload and 47 Mbps download.

we’ve also put a speed change request from the 12/5 plan to the 50/20 plan so next month we should be enjoying a bit more of an NBN.

To think that with FTTH you could of had up to 4 100/40 connections. and you wouldn’t of had to pay someone to rewire your phone sockets.

speed change has gone through

FLIR ONE for iOS or Android with solid orange power light

Troubleshooting steps when the FLIR ONE has a solid red/orange power light that will not turn to blinking green:

Mainly for my own reference.

This is pretty comprehensive and is easily applicable to Australia we have some more choice of vehicles which are not listed mainly in the hybrids but have more strict rules for imports, so no 2nd hand Japanese LEAFs here.

Their recommendation of type 2 sockets for Public AC charging, and CHADeMO and Type 2 CCS for Public DC charging is also something I agree with.

New Zealand like Australia had started to roll out Type 1 CCS but it looks like they’ll be changing all the stations to Type 2 CCS, to align with the European charging standard. Which makes more technical sense as our power girds are similar voltage and frequency.

Personally I hope Australia move to Type 2 CCS like NZ has, but at the moment all the power is in the vehicle manufacture hands, and they benefit form Type 1 CCS as Australia would become the only country in the world to have cars that are right hand drive and Type 1 CCS. Stopping any sort of importation of 2nd hand electric cars even if the rules are relaxed.

So those who have been following this blog know that I’ve been a keen enthusiast for EVs attempting to grow and expand the amount of EVs in Australia and the related charging network.

Some of my frustration on how slowly it has been growing has turned into why don’t I do something about it.

So I have. I’m now a director of a new company Recharging NSW Pty Ltd. The main aim is to encourage and support EV uptake in Australia.  By increase both cars on the road and public charging.

So there isn’t much I can share at present everything is still in the planning phases. but stay tuned.

So you might of seen a couple posts about Sun Valley Tourist Park, that is because we visit there a lot to visit grandma and grandpa (wife’s parents) .  So we decided because its outside of our return range we have to charge there to get home if we take the I-MIEV. but with the Electric Vehicle Supply Equipment (EVSE) that comes with the car limits the charge rate to 10amps max. So we convinced the park to install a 32amp EVSE.  This allow us to charge at the I-MIEV full rate of 13amps so 30% faster.

If you want to know more about the EVSE it’s an Aeroviroment EVSE RS.  It should work fine with the Holden volt, Mitsubishi Outlander PHEV, I-MIEV 2012 or later (may not work with 2010 models) and the Nissan LEAF.

If you are in the central coast and want somewhere to charge you can find the details on how to contact the park on plugshare. It’s available for public use depending on how busy the park is and the driver paying a nominal fee, and the driver phones ahead, during office hours.

So after crunching some more numbers and reading the green peace green energy guide I decided to change electricity retailers. Based of my need for a high VFIT (see previous post )  it was a choice between AGL (current provider), Click Energy and Diamond Energy.

Ok so the savings it’s not completely fair on AGL $55 of that $70 saving is 100% green energy which I’m not longer buying.  As click doesn’t offer it on their solar plan. but i can buy green energy from the a environmental trust for 4.2c/kWh and it’s a tax deduction.

Click saved me the most money has no contracts over AGLs 3 year killer and Diamonds 1 year one, it was also rated by green peace as middle range green. I’ve decided to move to click energy I’ll officially switch at my next meter read.

It’s official! We’re pleased to announce Click Energy will be a #naturalgassupplier by the end of the year http://t.co/SOtVNIIDJK

If I’ve convinced you to switch and you want to get $50 click has a mates rates referral program  drop me a message and we’ll go from there.

If you where lucky enough to install your solar panels before 30 June 2012 then you have nothing to worry about your nsw government guaranteed to get 60c for those pre 28/10/2010 in the scheme or 20c for those later. I didn’t own my house before that date so I missed out so we’ll mainly be looking at VFIT voluntary feed in tariff.

So to safe you the research I’ve put it in a table below using Energy Made Easy Website to look up power companies avaliable in NSW.

There are other things to take into account when choosing a provide through, like the rates and discount for example click charge 27.39 c/kwh plus 7% discount 25.47 c/kwh which beat the discounted AGL rate of 26.44 c/kwh. Diamond energy with discount is ~26.56 c/kwh. daily service charge will also have to be factored in but it has less of an affect on the bill size. with click offering 78.10 c/day AGL 74.877 c/day and Diamond Energy 78.10 c/day.

I’m currently with AGL but I will be doing some further number crunching to work out if I can get enough savings out of click energy to justify me contract break fee that AGL will charge me if I leave.
I also dispprove on AGLs submission to the RET review so I’m not so willing to give them any more money.

Click energy doesn’t provide green power, this is a slight sticking point as purchasing green energy means not that my power comes from green sources but my money does. But that can be purchased seperatly to your energy bill and more directly to green providers so that might be an option.

Has the solar been a good investment no…the capital cost was around $8.5k so with the amount saved it’ll take 10 years to pay back. The main reason for this is that we export way too much and the fit is so low if we got paid what it costs us it would of saved us ~$1500 a year and only 5.5 years to pay back.  Do I care if it was a solid investment not really.

If we look at how green it is if we take imported – exported (1095 kWh)  that’s how much power I’ve used from other generators which for my area is black coal, but that has been offset by my green power money purchasing green power from wind and biogass. so does my house run emissions free when it comes to electricity according to an accountant yes, because every kWh of power I’ve used has been purchased from a green source  but maybe not according to an engineer.

Other interesting notes on the power bill:

average kWh used per day including solar from April to may 2013 before purchasing the EV was 12.1 kwh

average kWh used per day including solar from July 2013 to April 2014 post purchasing the EV is 16.5 kwh

so the effect of owning an EV on our power bills is about 4.4 kwh per day $1.40 increased cost. Note: this would also include seasonal cost extras like summertime air con and winter time heating so I won’t have a clear picture until we 1 year of EV ownership.

Around May 2013 betterplace pulled out of Australian operations in an attempt to keep it’s parent company a float. This plan wasn’t overly great as the parent company still went bankrupt. http://www.smh.com.au/business/carbon-economy/how-better-place-got-lost-20130527-2n7gp.html this SMH article goes into a bit more depth, on why how and what’s to blame.

The real unfortunate thing is they put in quite a bit of infrastructure, with their own money and through government support through smart grid smarty city funding and now it’s being removed or unusable.

Below is pictures from at the Morisset Level 3 Charger, before and after removal.

The good news for the Level 3 fast chargers is that schneider electric have taken possession of these units back (they originally provided them) and at least they will be resold and not placed on the scrap heap.

Regarding your query about our Electric Car Charges, we did have charging areas however these have recently been removed from our Centre.

So while I’m working madly to try and increase the amount of EV chargers in my area they are being removed at a faster rate that I can convince people to put them in. 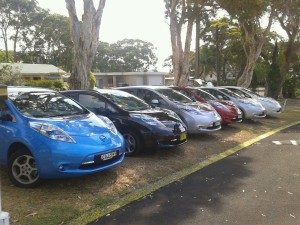 On the 27 of October met up with some LEAF drivers from Australian LEAF Owners Forum at Sun Valley Tourist Park see the above picture for a line up of their Leafs. It was a good meet up most of them had not met before and basically the whole meet up was based around interest in the cars.  so naturally the talk of the next meet up came up and I suggested next years 2014 hunter EV festival it’s actually down for a weekend this day 1 at the race track day 2 the expo at the foreshore.

Hello
In the lead up the the 2014 hunter Electric Vehicle festival weekend I’m canvassing Newcastle accommodation for places that are Electric Vehicle friendly so i can provide a list to out of town EV drivers.

If you are interested I would like to know how many power points you have within close proximity to a car park?  and what type they are ? (most will be 240 Volt 10 amp)

The last piece of information I need is if there is a surcharge to the accommodation cost for EV charging and how much will it be?

Thank you for your time

What I forgot the put in the email was the dates August 16th and 17th… and the approximate cost of power which I estimated at 15kwh (~6 hours of time) so at $0.25 per KWh $3.75.  So far only had one reply which was positive but you can keep and eye on my progress by checking the spreadsheet on google drive